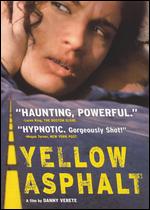 (87 mins) As western culture gradually began to infiltrate the Judean desert, once the sole domain of the Bedouin tribes, the convergence of contemporary mores and ancient traditions was unavoidable. At the edge of modern Israel and the Bedouin way of life, three dramatic encounters between two very different societies set the stage for Yellow Asphalt: the tragic death of a Bedouin boy on the asphalt road cutting the desert in two; the impossible marriage between a German woman and her Bedouin husband and the forbidden love affair of a Bedouin maid and her Israeli employer. Shot on location in the exotic landscapes of the Judean desert with the participation of the Bedouin tribe "Jahalin," at the heart of Yellow Asphalt are tales of the human condition - of passion and deceit, carelessness and love, courage and selfishness, in which no one culture has a monopoly on virtue or vice.