The University of Pennsylvania has a long tradition of supporting the study of the cultures, languages, and history of the Middle East. It was the first university in the United States to offer Arabic language instruction, as early as 1788, and the Penn Museum has a large collection of artifacts and tablets from ancient Mesopotamia. The Department of Oriental Studies was a world-famous center for the study of Semitic languages and the Bible. In the 1950s, in the aftermath of World War II, both the University and the country began to pay more serious attention to contemporary Middle Eastern affairs. In 1957, the United States government established programs to train a new generation of experts, translators, and diplomats. The 1957 National Defense Education Act (NDEA) provided funding for the creation of “Foreign Area Studies Centers” at major universities, and provided $25,000 of matching funds for the creation of a center that would focus on the modern Middle East.

The “Near East Center”, as it was called in 1966, was originally the brainchild of Professor Ephraim Speiser, a distinguished scholar of Hebrew and Chair of the Department of Oriental Studies. Speiser passed away in 1964, but the Center was, in the words of Professor Moshe Greenberg, “Dr. Speiser’s last great contribution to the University.” Professor Greenberg, who was Speiser’s successor to the title of A.M. Ellis Professor of Hebrew and Semitic Languages and Literatures, served as the Center Director for the first year of its existence. Its early course offerings included elementary Turkish, Political Institutions of the Modern Near East, and Iran and the West. Its goal was to "examine both individually and regionally the linguistic, historical, political, and socio-economic conditions of the Arab countries and Israel, Turkey, and Iran,” a mission that continues to this day.

In 1967, the Center came under the directorship of Professor Thomas Naff, a specialist in the modern Middle East who had previously taught at American University in Cairo. During his time, Naff significantly expanded both the Center and the Middle East Studies program at Penn. Naff recruited Middle East scholars across multiple disciplines, some of whom are still at Penn today. By 1975 Penn arguably had the most comprehensive and distinguished program in Middle East Studies in the country. Naff also established academic links, local, national, and international, that gave the Near East Center a very high national and international profile. Throughout the 1970s and 1980s, the Middle East Center was ranked number one or number two several times in national competitions. By the early 1980s, it was the premier institution for contemporary, as well as ancient and medieval, studies of the Middle East.

In 1983, Naff’s long and distinguished tenure as director came to an end, and after a brief period under Dr. Ahmet Evin, the Center was led by Professor Brian Spooner, who was Director from 1986 to 1995. The 1980s and 1990s saw an increase in the linkages between Penn and the schools and institutions of the Philadelphia region. “Outreach”, especially to the K-12 community, became part of the Middle East Center’s mission that continues to this day. The Middle East Center also increasingly prioritized cross-disciplinary collaboration and fostering a diversity of perspectives. Under Spooner and subsequent directors, the MEC developed a close and active network of activities among all the various subfields of Middle East Studies. Special attention was devoted to building bridges between the humanities and the social sciences, especially with regard to Middle Eastern languages (especially Arabic, Hebrew, Persian, and Turkish), religions (especially Christian, Islamic, and Judaic), and history (ancient, medieval, and modern). During this period, the Center developed its reputation as an integral part of the Penn community through sponsorship of interdepartmental panels, public talks and debates, and increased opportunities and resources for faculty and students.

Throughout the 1990s and 2000s, the Middle East Center has continued to develop and expand its initiatives both on campus and beyond. The early 2000s brought the unprecedented challenge of coping with a post-9/11 world, which brought a large number of requests for analysis and public commentary about the Middle East. Under Professor Robert Vitalis, Center Director from 1999 to 2006, the Center developed ties with a variety of news media and public interest groups, and increased sponsorship of teacher training events that focused on current events and the history of the Middle East for K-12 teachers. Vitalis also saw the expansion of the Center’s relationship with area colleges, especially historically Black colleges and universities. The Middle East Center became a hub of regional expertise for both journalistic and academic institutions, and remains an asset to both public and private teaching staff throughout the greater Philadelphia area.

In recent years, the Center has expanded even further its roster of academic programs, public events, and educational resources. Professor Firoozeh Kashani-Sabet served as Director from 2006 to 2019, and was both the first woman and first person from the Middle East to serve in the position. Under her leadership, the Center substantially increased engagement with its existing programs and established new ones focused on subjects that are often overlooked in Middle East Studies, from panels on Islamic health practices to workshops on less commonly taught languages, to essay and photography contests for undergraduates -- and, perhaps most importantly, the creation of a now-thriving major and minor in Modern Middle East Studies. The Center continues to maintain its status as meeting-point for national scholarship by sponsoring lectures and panels by leading intellectuals, authors, and political figures, as well as academic conferences. 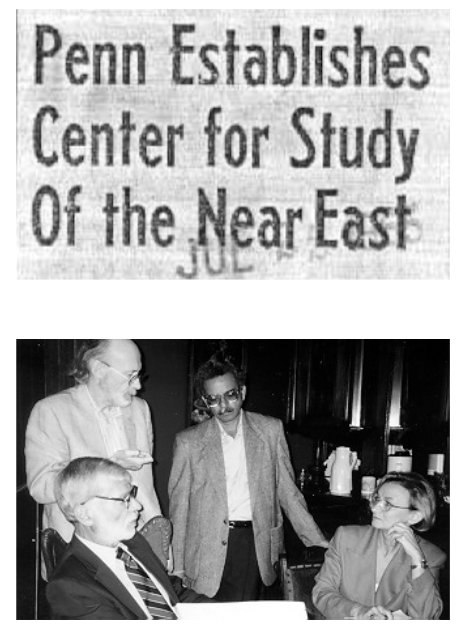