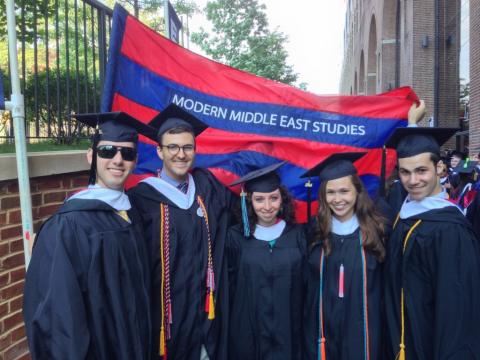 NOTE: For all students looking to declare a major or minor in MMES during this period of remote learning due to Covid-19, please fill in the attached electronic Major/Minor declaration form and email it to Interim Director Dr. John Ghazvinian at ghazvini@upenn.edu. Electronic signatures will be accepted.

There has rarely been a time in which an in-depth understanding of the languages, cultures, history, and politics of the contemporary Middle East has been more important. This interdisciplinary degree is designed to allow students to specialize in the Middle East as a region of the world and human experience by combining course work using both social scientific and humanistic approaches, underpinned by relevant language skills. Students will work with faculty committed to supporting interdisciplinary, applied, research-oriented advanced study. The major gives students opportunities to work on problems of politics, policy, history, ideology, social thought, economic development, and international relations.

Note: We currently do not offer graduate degree programs.

The major will consist of at least twelve course units to be distributed as follows:

Honors in Modern Middle Eastern Studies requires a thesis in addition to the basic requirements listed above. The honors thesis will be written over the course of the senior year under the supervision of an advisor selected from the Modern Middle Eastern Studies standing faculty. At the end of the first semester, S (satisfactory) or U (unsatisfactory) grade will be given, which will be replaced upon the completion of the thesis at the end of the senior year. Depending on the student's focus, this may involve the application of language skills acquired in the first three years. The thesis must receive a grade no lower than “A-” for the student to receive honors.

Students must have at least a 3.7 GPA in the major and a 3.3 GPA overall to be eligible for honors.

At least six course units on the Middle East including the following:

Declaring a Major or a Minor

Alumni on the MMES Major

"The MMES major provided me with the flexibility to pursue my own interests while giving me a solid and broad foundation for understanding the Middle East region. I cannot stress enough how very helpful the faculty, staff and graduate students were in guiding me to develop my many academic interests into something substantive and academically challenging." More...

Lea Makhloufi (2020), "Politics over a Pandemic: The Balance Between Necessity and Public Perception in Israel's Response to the Gaza WASH Crisis"

Jack Hostager (2019), "Understanding the Yemen Civil War through the North-South Divide: An Analysis of the Southern Transition Council"

Joshua Kadish (2019), "Beyond a Global Intifada: Assessing the Palestinian Boycott, Divestment, and Sanctions Movement and its Rise in the United States through Supply-Side Mobilization "