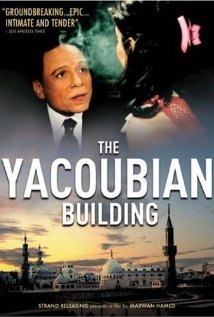 (165 minutes) The lives and loves of a handful of Egyptian aristocrats -- some flush, others living in shabby gentility -- set the stage for this epic-scale drama, based on a best-selling Egyptian novel. The Yacoubian is a luxury apartment building which was built in Cairo in the late '30s. At the dawn of the 21st century, the Yacoubian still has charm and a reputation for elegance, but is beginning to show clear signs of decay, and the rooftop laundry facilities now double as flats for the less fortunate. Among the residents of Yacoubian are Haj Azzam (Nour El Sherif), a self-made business tycoon noted for his strict religious views. However, Azzam's public morality is a far cry from his private life, in which he uses his fortune to buy both political influence and the hand of a beautiful widow (Somaya El Khashab). Hatem Rasheed (Khaled El Sawy) is a respected newspaper editor who has a shocking secret -- he's gay, and is romantically involved with handsome young soldier. Zaki Pasha (Adel Imam) is an aging self-styled lady killer who has long lived at the Yacoubian off the largesse of his family. When his sister kicks him out of their flat, he is forced to move into the office he used for his trysts. Zaki turns to his former girlfriend Christine (Yousra) for help, but she can do nothing for him. Meanwhile, Bosnaina (Hind Sabry), who lives in one of the rooftop apartments and cleans Zaki's room, has grown tired of her relationship with her boyfriend, Taha (Mohamed Imam), who has developed a troubling interest in Muslim extremism. Omaret Yacoubian (aka The Yacoubian Building) was the first feature film from director Marwan Hamed.