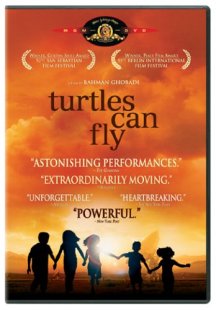 (97 mins) From acclaimed director Bahman Ghobadi comes the first film shot in Iraq since the fall of Saddam Hussein. "Heart-wrenching as well as spirit-raising" (The Hollywood Reporter), "Turtles Can Fly" mixes humor and tragedy to startling effect, resulting in a "very timely masterpiece" (TV Guide) about children struggling to survive in an endless war zone. On the Iraqi-Turkish border, enterprising 13-year-old "Satellite" (Soran Ebrahim) is the de facto leader of a Kurdish village, thanks to his ability to install satellite dishes and translate news of the pending US invasion. Organizing fellow orphans into landmine-collection teams so that they can eke out a living, he is all business... until the arrival of a clairvoyant boy and his quiet, beautiful sister.

In Kurdish with English subtitles.