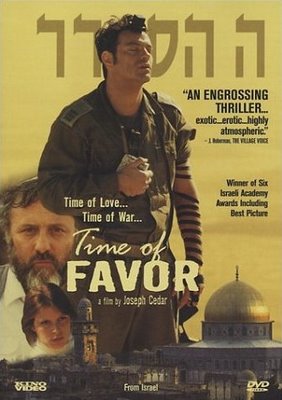 (101 min) Winner of six Israeli Academy Awards, including Best Picture, and highly acclaimed in its U.S. theatrical release, Time of Favor weaves an intricate tale of passion, loyalty and conspiracy amidst the contemporary political powder-keg. In a film the New York Times calls "an arthouse thriller," deft characterizations and a fine-tuned plot depict the people and stakes behind an Israeli settlement with a clarity and complexity not hinted at in today's headlines. From a peaceful desert sunrise on the Wailing Wall to a frantic chase through the 1800 year-old network of tunnels, Time of Favor raises issues of religious faith and duty to one's nation that are inextricably relevant to our lives today.