Tea on the Axis of Evil 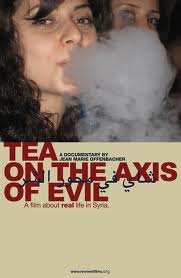 (67 mins) In 2003, the Bush Administration and the US media began referring to Syria and Iran in the same terms that had been used to justify the US invasion of Iraq.  As a result, it was becoming ever more possible that attempts to destabilize Syria and Iran would have proceeded unopposed by a misinformed American public.

After hearing reports about the friendliness of the Syrian people that conflicted with what was being presented in the news, filmmaker Jean Marie Offenbacher decided that this contradiction deserved further exploration.  She moved to Syria, alone, to record a portrait of life from all across the country--from the rural regions to the large urban centers and event to the halls of power in Damascus.

By presenting Syrians from all walks of life as they converse about their daily lives and discuss such topics as cultural tradition, globalism, religion and education--to name a few--Tea on the Axis of Evil makes the moderate, genial voices of the Syrian people available for the rest of the world to hear.

In English and Arabic with English subtitles.