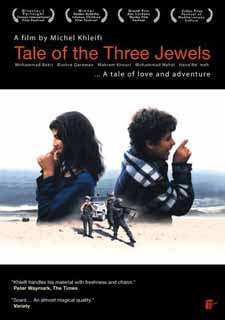 (75 mins) The first feature to be filmed in the Gaza Strip, Tale of the Three Jewels is a moving parable made in the days following the Hebron massacre and before the arrival of the Palestinian Authority. It tells the story of Yussef, a 12-year-old boy who lives in an imaginary world of his own and often escapes from the surrounding violence to the beautiful Gaza countryside. One day he meets Aida, a ravishing gypsy girl with whom he falls in love. When Yussef declares his intention of marrying her when they grow up, she tells him he must first find three jewels missing from her grandmother’s necklace, which was brought from South America by her grandfather. From the acclaimed Palestinian director of Wedding in Galilee and Fertile Memories.