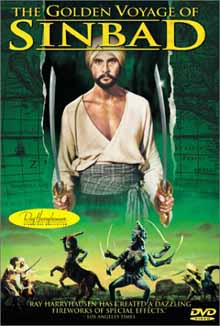 (106 mins) The mythical Arabian sailor's golden voyage begins when one of his men shoots down a bat-winged homunculi, which drops a gold medallion onto the ship's deck. Sinbad begins wearing the medallion, which gives him strange dreams about a black-robed villain and a woman with an eye tattooed on her palm. A return to the swashbuckling adventure of 30's serials and 50's B-movie matinees, The Golden Voyage of Sinbad was a surprise success. A final Charles H. Schneer/Ray Harryhausen Sinbad movie followed in 1977, Sinbad and the Eye of the Tiger.