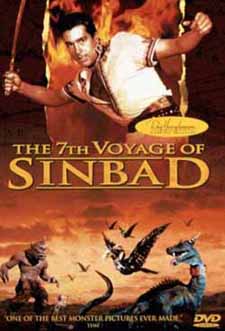 (88 mins) The first of the famed Charles H. Schneer-produced Sinbad movies, The 7th Voyage of Sinbad brought the legendary sailor into combat with a variety of creatures, all brought to life by the stop-motion magic of special effects guru Ray Harryhausen. In this 1958 screen adventure, Sinbad and his men sail to the island of Colossa and find trouble with a man-eating cyclops. Facing certain death, the crew is rescued by the bald Sokurah the Magician and his young genie Baronni. Sokurah returns with Sinbad and his men to Baghdad, but the evil magician wants to return to the magical island for further booty.