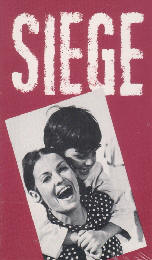 (95 mins) This feature film deals with the predicament of a war widow, Tamar, who loses her husband during the Six Day War. Her husband's friends do not want his memory to be forgotten, and this forces her into the role of ever-mourning widow. Tamar, who lives with her young son, attempts to break away from the past and form new relationships and normalize her life. This film depicts the human predicament in times of war - in this case in an Israeli context.