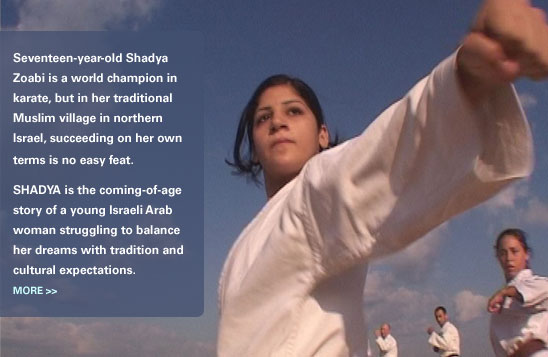 (? mins) Like many 17-year-old girls, Shadya Zoabi enjoys listening to music and hanging out with her friends. But unlike most other girls, Shadya is also a world champion in karate, a feminist in a male-dominated culture and a Muslim Arab living in Israel. SHADYA tells her story over the course of two years, as she journeys from teenage girl to woman, from daughter to wife and from one family to another.

Shadya is lucky to have grown up with a father who wanted his daughter to be free to practice karate and develop her talent in the sport to the fullest. But in spite of her father’s support, the social pressure from her brothers and the surrounding community is difficult to overcome. In her brothers’ view, a Muslim woman has a specific path in life and is forbidden to stray from this destiny. At the same time, Shadya is grappling with the challenges that Muslims face as citizens of Israel. Her internal conflicts intensify when she meets the Palestinian team at an athletic competition, and when she prepares for marriage at the height of her career.

At the start of the film, Shadya, the 2003 World Shotokan Karate Champion, is full of optimism and self-confidence. “I’m different,” she says, “This is the way I am.” But will she succeed in balancing her aspirations after her marriage? Will she stay true to her promises to never give in and continue competing in karate? Depicting a universal conflict between tradition and modernity, SHADYA is the coming-of-age story of a young Muslim woman who desires to succeed on her own terms while staying committed to life within her community.