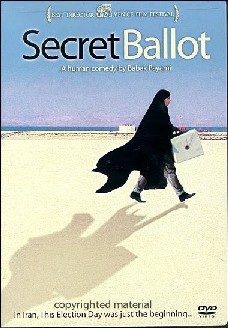 (105 mins) Winner at five international film festivals, including Best Director at the Venice Film Festival, Secret Ballot is a satirical comedy that humorously sheds light on the universal discrepancies of the voting process and gender differences. It’s Election Day on a remote island off the coast of Iran and a ballot box is parachuted to shore. An unnamed soldier is assigned to escort a female bureaucrat to gather votes. Together they embark on a chaotic journey, turning the island upside down desperately seeking anyone’s vote. There is more to the ‘secret ballot’ than the two could ever imagine.