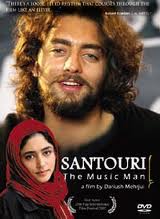 (106 mins) From celebrated Iranian director Dariush Mehrjui (The Cow; The Cycle) comes this contemporary drama about a musician who plays the santour, an ancient stringed instrument. Unfortunately, Santouri is also addicted to heroin, which takes an emotional and physical toll. His life takes a tragic downward spiral after authorities ban him from playing in public and his wife leaves him.

Master filmmaker Mehrjui has the distinction of being censored by both the Shah of Iran and the Islamic fundamentalists that followed in the wake of the Revolution. That he has survived and continues to make films is a testament to his talent, fortitude, and influence on younger generations of filmmakers. Still unafraid of controversy after 30 years if Iranian filmmaking, Mehrjui suggests in his film that his country's current cultural repression is connected to its rampant drug addiction.