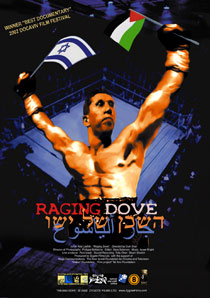 (90 mins) “I’m the only Arab-Israeli-Palestinian-Muslim-Baptist-American World Champion I know.” Welter-weight boxing champion Johar Abu Lashin could have been the most well-known boxer of his time, if only he had not made some mistakes with flags. Born in Nazareth, Abu Lashin was destined to live a life full of paradoxes. Waving the Israeli flag after winning his first World Title, he flew the Palestinian one after winning his next five years later. Turning both Israelis and Palestinians against him Abu Lashin moved to Johnson City, Tennessee to raise horses and settle down with his wife, a local boxing manager. With dreams of peace sweeping through the region in the 1990s, Abu Lashin planned a dramatic comeback both in the ring and in his personal life. He set plans for two World Title fights, one in Nazareth and the other in Gaza, in hopes of winning the hearts of both Israelis and Palestinians and becoming a unifying figure for both sides as they attempt to negotiate a peaceful resolution to their bloody conflict.

In English, Hebrew and Arabic with English subtitles.