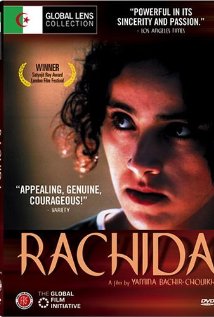 (100 minutes) The first full-length feature film by Yamina Bachir evokes memories of the worst atrocities of the terror in Algeria. The young teacher Rachida is teaching at a school in Algiers, when she is stopped in the street by a group of youths who demand she take a bomb and place it in the school. She recognizes one of the terrorists and refuses. Then she is cold-bloodedly shot and left for dead. Miraculously, she survives. To recover, she hides with her mother in a village far from the city. But terrorism is unavoidable there too. There are no safe havens in Algeria. Rachida is a moving story about a community - and above all about the women in it - under the threat of terror. It's a world where you can be kidnapped, raped, shot, where an unmarried woman with a scar on her belly can't go to a bathhouse, because people might think she has had a Caesarean.