People of the Wind 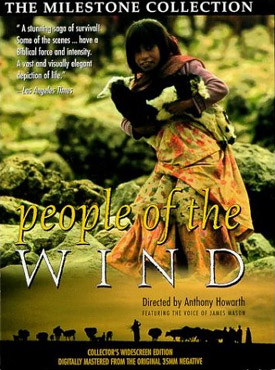 (110 mins) The Bakhtiari people of western Iran annually embark on an astounding migration that takes a half-million people, their livestock, and all their possessions across 200 miles of intensely difficult mountains. And this is no simple stroll: the Zagros Mountains, which must be crossed to reach the summer pastures, are as tall as the Alps. This documentary, which was shot on film in the 1970s, focuses on one particular tribesman whose words, translated into English and read by the actor James Mason, tell the timeless story of the great migration. The photography is often spectacular, and the widescreen format is well suited to the sweeping mountain panoramas. The tribesman relates the traditional rituals of life for the Bakhtiari, from how they tend their animals to their elaborate wedding feasts, and over the course of the film the tribe's unique mountain culture emerges. Though a viewer may wonder how (or if) the migration has changed in present-day Iran, this film is the original production of 1976 and offers no update.