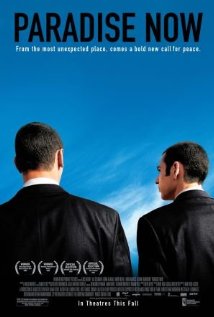 (91 minutes) Khaled (Ali Suliman) and Said (Kais Nashef) are Palestinian friends recruited by a terrorist group to become suicide bombers in Tel Aviv. Armed with explosives, they attempt to cross into Israel, but are pursued by suspicious border guards. Khaled returns to the terrorists, while Said sneaks into Israel and ponders detonating at another target. After Khaled and Said reunite to begin their mission again, Khaled has reconsidered, and tries to convince Said to give up the bombing as well.