Out of Cordoba: Averroes and Maimonides in Their Time and Ours 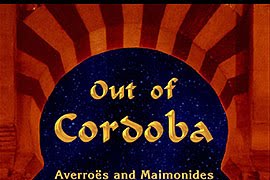 OUT OF CORDOBA: AVERROES AND MAIMONIDES is a feature documentary film about Jews and Muslims struggling for social justice and against the hijacking of their religions by extremists. Inspired by two medieval 'wise men of Cordoba' - one Muslim, the other a Jew - these contemporary people of faith are promoting the values of democracy and tolerance on the frontlines of the often-violent clashes that have come to define our new century. The film tells the story of the film's director, an American Jew, who undertakes a journey around the Mediterranean after the attacks of 9/11, visiting Spain, Morocco, France, Italy, Egypt, Palestine, and Israel. He meets people who are utilizing their religious traditions to challenge the propositions - advanced by several neo-conservative pundits - that there is an inevitable "clash of civilizations" between the West and the Muslim world, an incompatibility between Islam and democracy, and an unsolvable conflict between Muslims and Jews