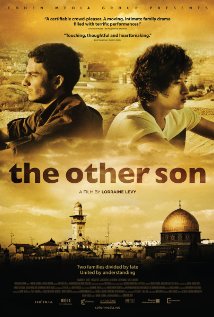 (105 minutes) “The Other Son,” a new film by Lorraine Lévy, shares its premise with “The Prince and the Pauper” and Shakespeare’s “Comedy of Errors,” though its mood is more melodramatic than humorous. The idea of infants switched at birth, each growing up as somebody else, is an old and potent one in literature. The possibility of such a mix-up happening in real life evokes both fascination and horror and raises stark, primal questions of identity. Is who you are determined by the genetic fingerprints of your biological inheritance or by the influence of your environment? These issues arise with special intensity for Joseph (Jules Sitruk), Yassin (Mehdi Dehbi) and their families, who live on opposite sides of the Israeli-Palestinian divide. Joseph is the dreamy, artistic son of a high-ranking Israeli officer (Pascal Elbé) and a French-born doctor (Emmanuelle Devos), emerging from a cozy, privileged adolescence and preparing for his own military service. A routine blood test shows that he cannot be his parents’ child, and further investigation reveals that their baby — Yassin, that is — has been reared by an Arab couple (Areen Omari and Khalifa Natour) on the West Bank