Moment of Innocence, A 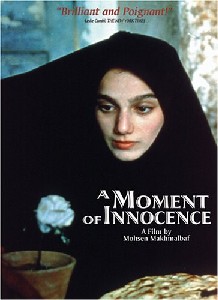 (75 mins) A poetic and often comic re-construction of an incident that dramatically affected the lives of two people. In 1974, director Mohsen Makhmalbaf, then a 17-year-old rebel against the Shah's regime, stabbed a young policeman during a botched attempt to steal the cop's gun. Makhmalbaf spent five reflective years in prison, and was freed after the Islamic revolution. While making an earlier film, Makhmalbaf again met the policeman, who showed up and declared he wanted to be an actor. The director would use this reunion as a springboard to A Moment of Innocence. In re-creating their violent encounter for film, it becomes clear that each man had a unique perspective on the events of that fateful day.