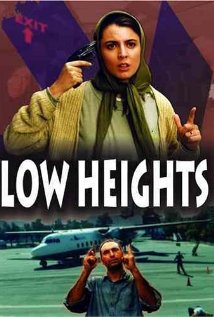 (115 minutes) Although Low Heights (aka Low Altitude and Ertefae Past in Farsi), directed by Ebrahim Hatamikia, is about the hijacking of an airplane, the drama enables filmviewers to assess conditions in contemporary Iran. Based on a true story, Ghaseem (played by Hamid Farokhnejad) has given up hope of ever finding happiness in his native Iran. Although he has funds to migrate to another country, he evidently lacks government approval. Accordingly, he buys airplane tickets for his entire family with the intention of hijacking the plane, but without any clear destination. When the family boards a propeller from Ahvaz to Bandar Abbas, Ghaseem has told them that they have jobs already lined up with Total Oil Corporation. Once midair, Ghaseem pulls out a gun to hijack the flight; the small airport where he boarded did not have a security-screening machine, and no pat-down search was conducted. Emotional outbursts, one after the other, constitute most of the dialog at this point. Presumably, we could be laughing at all the nonsense spoken, but the tragedy is real. The pilot, pressed for a non-Iranian destination, suggests a landing in Dubai; but just as the plane lands there, control of the gun passes to the airplane's security guard, so the plane takes off again. With insufficient fuel to land at any airport in Iran near the Persian Gulf, the plane crash lands somewhere in a mountain desert region. The film ends before disclosing the fate of the crew and passengers, who survive the landing, including Ghaseem's second son, who is born on the flight. Why did Ghaseem take such extraordinary measures to fly his family out of Iran? Clearly, he is unemployed and desperate for steady work to provide security to his family. Despite the wealth accruing from Iran's oil revenues, the film discloses that not all oil workers have job security or medical benefits. His son suffers from a malady, presumably autism, which could have been prevented by a single injection at birth. One member of his family was whipped thirty times for indulging in alcohol, thus hinting that the Iranian regime's punishments far exceed the crimes. Ghaseem might, of course, have applied for an immigrant visa, but he evidently was not aware how to undertake a legal method of migrating from Iran. Thus, while the story focuses on a pathetic melodrama, and the discourse is frantic with occasional humor, the message is that the Iranian government is not responsive to the needs of some of its most humble and loyal citizens.