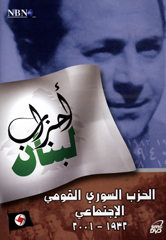 (180 mins) The Syrian Social National Party (SSNP) was established under clandestine circumstances by Antoine Saadeh in the early 1930s. Its primary objective was to unify the people of greater Syria. Throughout the 1930s, the SSNP attracted numerous followers by expanding into Syria, Jordan and Palestine. The party gained popularity for its resistance to the Israeli invasions of South Lebanon. After a brief division in the 1980s, the party was reunited over the following decades and now has deputies in the Lebanese parliament. This is part of a series documenting six of Lebanon’s most influential and significant political parties, providing a comprehensive historical context for the parties, their founders, and members.