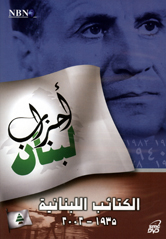 (200 mins) The Kataeb Party (also know as The Phalange Party) was founded by Sheikh Pierre Gemayel in 1936. It quickly emerged as a nationalist youth movement and a champion of the Christian cause in Lebanon. Throughout the 1960s the party was considered one of the largest political organizations within Lebanon. In the 1970s, it evolved into a private militia under the leadership of Bashir Gemayel, the founder’s son. Bashir was elected president in 1982, following Israel’s invasion of Lebanon, but was assassinated eight days before he was to assume power. This is part of a series documenting six of Lebanon’s most influential and significant political parties, providing a comprehensive historical context for the parties, their founders, and members.