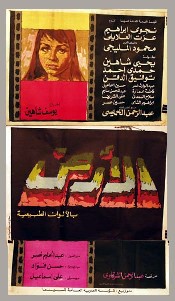 (130 mins) Chahine's classic film, adapted from Abdel Rahman al-Sharqawi's well-known novel of the same name, was eight years in the making. Chronicling a small peasant village's struggles against the careless inroads of the large local landowner, The Land shows why political oppression does not necessarily lead to a sense of solidarity among the disinherited. This contemplative, epic film about feudalism in rural regions was named the best Egyptian film ever made in a recent poll of Egyptian film critics.