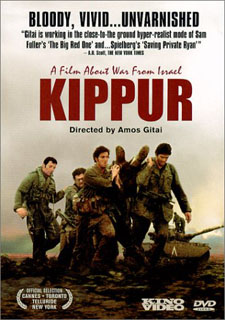 (110 mins) Yom Kippur, October 6th, 1973, war breaks out. Weinraub and Russo "fly" by car to the Golan Heights to try to find their military reserve unit. Unsuccessful, they decide to latch on to an Air Force first aid team. They are dispatched immediately. The helicopter crew flies back and forth across the Golan carrying out the dead and wounded. Their excitement and fervor quickly turn to shock and exhaustion. At their base and during missions, they develop a closeness and intimacy. On October 11th, Weinraub's 23rd birthday, they are sent to Syria on a mission. Their helicopter gets hit and crashes, the crew is sent to the hospital. "Kippur" is a profound war movie, based on the director Amos Gitai's own Yom Kippur War experiences, that presents a personal cinematic documentation about one of the toughest times in Israel's history.