Kandahar: Journey into the Heart of Afghanistan 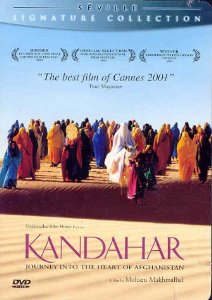 In the year 2000, Nafas (Niloufar Pazira) a 29-year old Afghan-born Canadian journalist travels back to her homeland in search of her sister. The sister was maimed by the long war, and her life under oppressive Taliban rule is no longer worth living; she has resolved to commit suicide on the last solar eclipse of the century. Dependent for her travels on the uncertain help of men, Nafas encounters many other charismatic women hiding under the seclusion of the burqas. The inquiries she makes to find her sister raise the veil just enough to reveal the torment of Afghan women, deprived of rights, education, and basic health care. A doctor must question his women patients, who are hidden from him by a canvas wall, through a child intermediary; he does not touch them. The ending is inconclusive.