Jerusalem Center of the World 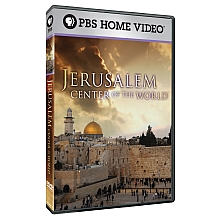 (120 minutes) For over 40 centuries, untold numbers of Jews, Christians and Muslims have come to Jerusalem to look for God, while billions more have worshiped from afar. Jerusalem: Center of the World, a two-hour epic event in Hi-Definition by Emmy Award-winning producer/director Andrew Goldberg and Oregon Public Television, is the first documentary of this scope to delve into the historical facts and religious beliefs that have led so many thousands to live and die for this city. Host Ray Suarez of The NewsHour With Jim Lehrer, together with an outstanding roster of scholars, explores the founding of the city, and the birth and convergence of the world's three major monotheistic religions. He lends voice to the key events in the city's history as described in the Hebrew and Christian Bibles, the Talmud, the Hagaddah, the Koran, and the Hadith. The film takes viewers far beyond the city's exteriors to follow the paths taken by Abraham, David, Jesus, and Mohammed, among countless others. From a strikingly intimate perspective, Suarez travels deep into the city. He touches the walls of Hezekiah's famed underground water-filled tunnels built over 2500 years ago; he faces the same wall the Biblical King David likely faced when conquering the city in the 10th century B.C.E. Suarez also visits the recently discovered Siloam pool where Jesus, it is said, cured a man's blindness, and he takes us right into the Dome of the Rock from where Mohammed, Muslims believe, ascended to Heaven. With illustrations from over 300 pieces of iconic artwork, Jerusalem: Center of the World brings one of the oldest cities in the world to life.