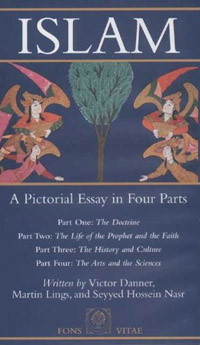 (90 mins) This video program on Islam aims at a high degree of accuracy and depth. The film is divided into four parts focusing on different aspects of Islam.

Part One: The Doctrine

What Muslims believe; The nature of Revelation and the succession of Prophets; The nature of religion as both doctrine and method; How man is viewed in Islam; The cyclical doctrine of history; The importance of Abraham — not only as the father of Judaism, Christianity and Islam, but in relation to Mecca and the building of The Kaaba; The place of Moses, Jesus and Mary in Islam; The doctrine of unity as manifested in the attitude and daily life of Muslims; The Qur’an — as the origin and foundation of Islamic law and metaphysical knowledge; The Qur’anic doctrine concerning man and the structure of the universe; The function of the Prophet Muhammad as the "Seal of the Prophets;" The example of the Prophet — the Sunnah; The Prophet’s place in history and his prophecies concerning the anti-Christ, the second coming of Jesus and the Last Day.

Part Two: The History and Culture

The following topics are covered: Islamic law; Sufism; Spiritual attainment in Islam; The four Rightly-Guided Caliphs: Abu Bakr, Uthman, Omar and Ali; The spread of Islam outside Arabia; Omar and Jerusalem; What happened to the existing religions of countries absorbed into the Muslim empire; The question of conversion; The unique integration of the Islamic doctrine with the cultural forms of the many civilizations with which it came into contact, illustrated by examples of Moorish, African, Arab,

Turkish, Persian and Indian art and architecture; The rise of the Ottoman Turkish Caliphate, the Mughal and Safavid empires and their place in the cultural and religious expansion of Islam; The decline of these civilizations and the period of colonialism; Communism and Islam; Islam in Africa and the Far East; Islam and the modern world.

Part Three: The Life of the Prophet and the Faith

A view of the world into which the Prophet Muhammad was born; The monotheism of Abraham; The life of the Prophet Muhammad: His birth, upbringing, work, marriage and spiritual retreats leading up to the Revelation; The hardships endured in Mecca and the subsequent migration to Medina; The Night Journey and the Ascension; The nature of Holy War; The return to Mecca and the final victory of Islam in Arabia; The practices which the Prophet established; The concept of unity; The significance of the Shahada (or "witnessing of Faith"); The Five Pillars of the Faith — the aims and symbolic content of each.

Part Four: The Arts and the Sciences

The requirements of sacred art; Qur’anic calligraphy — the central art of Islam; The principles of Islamic art and architecture; Realism and stylization; How Islamic art suggests the Divine presence; The significance of the arabesque and geometric forms; The unity of natural forms in the microcosm and macrocosm as a reflection of Divine unity; Abstract art — two views; The art and science of Qur’anic recitation; The development of mosque architecture . . . "a sacred void;" The requirements of prayer; The madrasah or mosque school; Al-Azhar University, Cairo; The integration of classical sciences with the Islamic world view; The difference between traditional Islamic studies and modern Western science; The Divine intellect; Traditional Islamic cosmology; The Muslim contribution to the sciences; The revivification of Islamic art and sciences; The Islamic world view rediscovered.