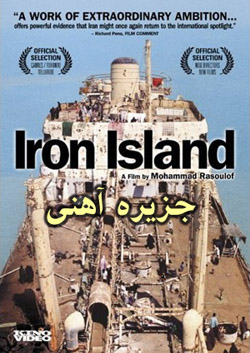 (90 mins) A huge, abandoned oil tanker becomes its own world as squatters make their lives upon it. Presiding over this haphazard society is Captain Nemat (Ali Nassirian), a leader who's part visionary, part supply sergeant, part snake oil salesman. As he bounds up and down the tanker's halls and stairways, he charmingly persuades the families living in rusted rooms to obey his rules while he hustles the goods they all need to survive. But this microcosm is threatened from within (the ship is slowly sinking) and without (the owners want to sell it for scrap metal), forcing Nemat to seek a radical solution. Meanwhile, Nemat's protege Ahmad (Hossein Farzi-Zadeh, The Beautiful City) has fallen in love with a girl who's already promised to marry another man. While Iron Island can be read as an allegory about life in the Muslim world, life on board the tanker feels organic and follows its own internal logic, making the movie vivid and vital. The movie's political conundrums feel implacably real and have no easy or absolute solution. But Nassirian is the movie's core; he holds Iron Island together with the same unquenchable drive that Nemat uses to hold together his ship-bound kingdom. Altogether, a rich and compelling film.