Iraq for Sale: The War Profiteers 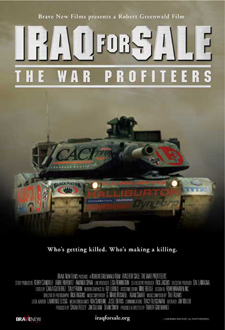 (75 mins) Director Robert Greenwald (Wal-mart: The High Cost of Low Price; Outfoxed; and Uncovered) takes you inside the lives of soldiers, truck drivers, widows and children who have been changed forever as a result of profiteering in the reconstruction of Iraq. Iraq for Sale is the story of what happens to everyday Americans when corporations go to war. The film uncovers the connections between private corporations making a killing in Iraq and the decision makers who allow them to do so. “A horrifying catalog of greed, corruption and incompetence,” writes the New York Times and the Huffington Post declares: “[Greenwald] has delivered a film that connects on both an emotional and an intellectual level. And, most importantly, it does so by letting the facts – and the victims of the war’s privatization – speak for themselves.”