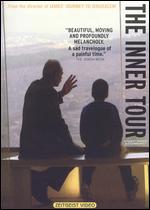 (98 mins) Controversially divisive in the Israeli press for its sympathetic portrayal of Palestinian citizens, The Inner Tour (Official selection, Sundance Film Festival, 2002) is a fascinating and humanistic portrait of ordinary people caught up in one of the most emotionally painful and seemingly intractable national conflicts of our time. Just months before the second Intifada began in 2000, Israeli director Ra'anan Alexandrowicz filmed a group of West Bank Palestinians on a three-day bus tour to Israel, where many of the passengers once lived. Their weekend trip becomes an extremely charged journey of deep emotional distances and contradicting realities as the travelers interact with ordinary Israelis and visit places that they feel simultaneously rooted to and alienated from. Their contemplative observations of and encounters with the country they are visiting lie at the heart of this piercingly resonant documentary.

In Arabic, English, and Hebrew with English subtitles.