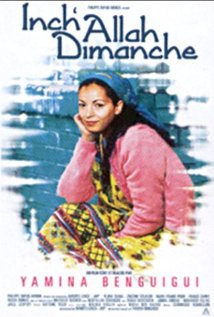 (98 minutes) In 1974, under the “Family Reunion” law, the French government decided to allow the families of Algerian men working in France to legally emigrate to join them. Inch’Allah Dimanche tells the story of one such family. After a tearful good-bye to her friends and family in Algeria, Zouina (Fejria Deliba) arrives in France with her three children and moves into a house that her husband has rented for them, filled with the hopes and promises of a new life. However, Zouina’s husband Ahmed fears that his wife’s honor may be threatened in this foreign society and subsequently forbids her to leave the house. Throughout the film, Zouina is physically abused by her husband and emotionally attacked by her caustically “evil” mother-in-law. Zouina’s neighbor, Madame Donze (France Darry), is a xenophobic busybody so obsessed with winning the prize for the best flower garden that she cannot empathize with Zouina and is cruel to her. Meanwhile, a young woman who works in a makeup factory, Nicole (Mathilde Seigner), helps Zouina feel accepted, and sparks her interest in French culture and the new world around her. As the days pass, Zouina finds herself struggling between traditional Algerian values and the rapid feminization and modernization of France. Constantly subject to the tyrannical wrath of her domineering mother-in-law and miles away from her friends and family, Zouina finds her only source of relief is Sunday – the one day that Ahmed and his mother are out of the house – when she takes her children on excursions through the countryside and attempts to come to terms with the difficulties of immigration, integration and an ostensibly impossible sense of independence.