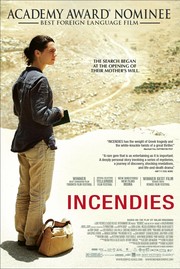 (139 minutes) The new film from Canadian director Denis Villeneuve is based on Wajdi Mouawad's 2003 play Scorched. It's an image of women and children slaughtered on a burning bus during the Lebanese civil war in the 70s, and the image extends to the incineration of history, of memory, and the bitterness of revisiting the charred remains of violence and tragedy. Villeneuve's movie speaks of the transgressive obscenity of war, particularly civil war, and how its survivors must come to terms with having been shaped by atrocity. They are, in a sense atrocity's descendants. The story begins with an ageing, expatriate Lebanese woman in Quebec being mysteriously struck dumb at a swimming pool. After her death, her grownup twin children discover from the will that they have a brother about whom they knew nothing, and a father, still living. Now they must travel back to Lebanon to find them both: it is a journey into a dark and terrible past. Like Atom Egoyan, Villeneuve touches on myth and memory and, tangentially, on North American politics of identity and grievance. It's an intriguing movie, in some ways, but its contrived and even bizarre final revelation depends on coincidences of almost Hardyesque proportions. It is not really believable, and yet if it is not taken literally, but as a cinematic prose-poem, it has undoubted force.