Frontline: Journey to the Occupied Lands 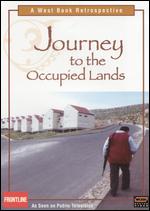 (86 mins) The roots of the ongoing conflict between Arabs and Israelis in the Middle East as well as the chances for future peace are examined in this documentary. Created as part of the award-winning PBS current-affairs series Frontline, Journey to the Occupied Lands follows journalist Michael Ambrosino as he visits Israeli-occupied sections of the West Bank and Gaza, interviewing the Arabs who live under occupation while exploring related issues, including the legalities of land ownership, Israel's military, and what the future holds for settlements on either side.