Forbidden Marriages in the Holy Land 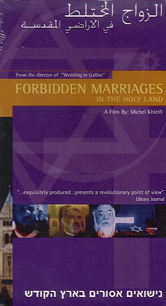 (66 mins) Exploring the lives and loves of eight mixed marriages from different generations and backgrounds, director Michel Khleifi uncovers the mutual intolerance of the Middle East's three monotheistic religions: Christianity, Islam and Judaism. Among the defiant couples is a young Palestinian musician living with his Israeli musicologist girlfriend, a fiery Palestinian woman married to a Kurdish Jew, and a Jewish woman who converted to Islam to be with her husband in Gaza. A daring and spirited expose, Forbidden Marriages in the Holy Land celebrates people who, in a region scarred by conflict and catastrophe, chose love instead of hate.

In Arabic and Hebrew with English subtitles.