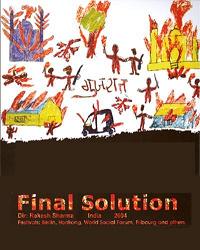 (218 mins) Final Solution is a study of the politics of hate. Set in Gujarat, India, the film graphically documents the changing face of right-wing politics in India through a study of the 2002 pogroms against Muslims in Gujarat. The film examines the aftermath of the deadly violence that followed the burning of 58 Hindus on the Sabarmati Express train at Godhra on February 27 2002. In "reaction" to that incident, some 2,500 Muslims were brutally murdered, hundreds of women raped, and more than 200,000 families driven from their homes. Borrowing its reference from the history of Nazism, the title of the film exposes what the film director calls 'Indian Fascism' and seeks to remind that "those who forget history are condemned to relive it." An incisive, unflinching look at Muslim-Hindu relations, and winner of numerous international film awards.

In Hindi/Gujarati with English subtitles.