Everything Under the Sun: Astronomy, Mathematics, and Islam 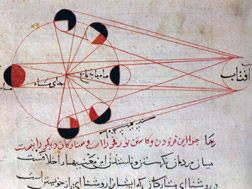 (26 mins) Picking up mathematics and astronomy from where the ancient Greeks had left off, Arab scholars paved the way for the Copernican revolution and the rebirth of science in Europe. This program reveals the Empire of the Caliphate’s role in developing the Indo-Arabic decimal system, algebra, and algorithms and in refining the science of optics and the Ptolemaic model of the solar system. The application of astronomy to sacred ends, such as accurately fixing the time for prayers, the direction of Mecca, and the start of Ramadan, is also considered.

Part of the series "When the World Spoke Arabic: The Golden Age of Arab Civilization."