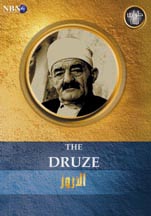 (210 mins) Compared to the other religions of Lebanon, the Druze, who originated in Egypt and settled in Syria, Palestine, and the mountains of Lebanon, have gone relatively unnoticed. They are members of a monotheistic Muslim sect that follows the teachings of Al-Hakim (985-1021), a Fatimid Caliph. Like most religious communities in the Middle East, Lebanese Druze have suffered the tribulations of political strife and foreign conquest. In spite of this, the Druze have preserved their traditions and religious beliefs, written between 1017 and 1043, for nearly one thousand years. Using rare footage, gripping interviews, and reliable historical documents, this fascinating documentary presents a vivid portrait of this little-known community.

In Arabic with French and English subtitles.