Dreams of Sparrows, The 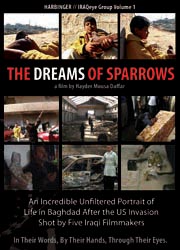 (75 mins) The Dreams of Sparrows is the first feature documentary from the IRAQeye Group, a collaboration between American and Iraqi filmmakers. After the capture of Saddam Hussayn, Daffar’s search for the truth takes him through all walks of life in Iraq, and particularly into the heart of the arts community of Baghdad. As the film unravels, the interviews veer towards the politics of occupation and resistance, concluding with the battle over Falluja and the devastating death of one of the crew members. In somber self interviews made following the production, the filmmakers reveal the dramatic changes in their beliefs caused not only by the situation in Iraq, but also by the process of documenting it. Iraqi director Daffar and his team of contributing filmmakers share their vision of life in Baghdad under the US occupation.