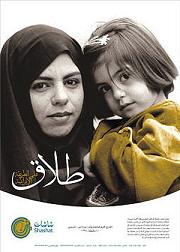 (80 mins) A new documentary that goes where Western cameras have never before gone: into an Iranian divorce court. The film is directed by award-winning independent filmmaker Kim Longinotto (co-director of DREAM GIRLS, an expose of the Japanese all-woman musical theater company, which played at Film Forum) and Ziba Mir-Hosseini, an Iranian anthropologist and writer, based in London, whose specialty is women's rights and family law in the Mid-East. Her 1993 book, Marriage on Trial: A Study of Islamic Family Law, inspired Longinotto to collaborate with her on this production. Inside an Iranian divorce court, a stream of veiled women (some only teenagers, others elderly ) make use of reason, wit, charm, and chicanery to get what they want above all else: a divorce.

In English and Farsi with English subtitles.