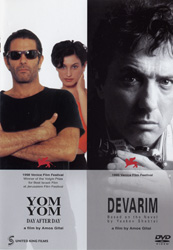 Devarim (1995, 90 mins) The movie, based on the novel Past Continuous by Yaakov Shabtai, follows three main characters - Caesar, Yisrael and Goldman, who live their lives in a cycle while looking for meaning to their existence. Caesar womanizes obsessively, Goldman is on a constant search for the reason for his existence and Yisrael views himself as a pianist and artist. The film studies the main characters' relationships with their families and amongst themselves over a nine month period in Tel-Aviv.

In Hebrew with English and Arabic subtitles.

Yom Yom (1998, 99 mins) "Yom Yom" is a comedy of errors, that takes place in Haifa. Mosh (Moshe Ivgi) is the hero, an only child of 40, a hypochondriac who cares about nothing. Mosh works at the family bakery as life just passes him by. Mosh's relationships with his mother Hanna (Hanna Maron) is a real love affiar - Hanna is an adorable pest married to Mush's father, Yussef (Yussef Abu Warda), an Arab from Haifa. The film "Yom Yom" deals with the relationships between the main characters: Mosh, his parents Hanna and Yussef, his wife Didi, his close friend Jules, his lover Grisha and his doctor, Dr. Catharine Perrier.

In Hebrew with English and Arabic subtitles.