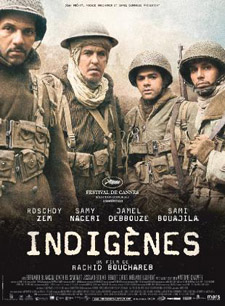 (119 mins) The critically acclaimed and Oscar nominated war epic Days of Glory (Indigenes) is "a chronicle of courage and sacrifice...told with power, grace and feeling and brought alive by first-rate acting" (The New York Times). Telling the true story of a band of North African World War II soldiers who heroically fought their way across Europe while battling discrimination within their own ranks.

In French with English subtitles.