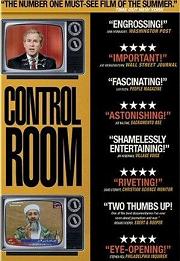 (86 mins) Documentary on the al-Jazeera television station. Control Room is a rare film that is both timely and timeless: timeless because it explores the ancient and complex relationship between the Western and Arab worlds, timely because it reveals how satellite television has changed the way wars are reported - from news providers, driven by the patriotism of their audiences, to Army information officers, driven by military objectives.