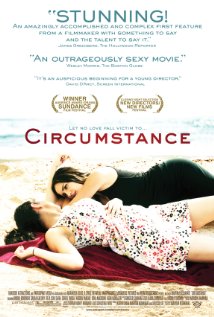 (105 minutes) A suspenseful tale of love and family upended by obsession and suspicion, Circumstance is also a provocative coming-of-age story that cracks open the hidden, underground world of Iranian youth culture, where a young woman's most electrifying passions can become the most dangerous of secrets. The Audience Award winner at the 2011 Sundance Film Festival, writer-director Maryam Keshavarz's debut feature boldly takes filmgoers inside a modern Iran rarely witnessed by outsiders: an exhilarating, invisible realm of illicit parties where young hipsters risk arrest, and their futures, as they experiment with sex, drugs and defiance, all while trying to evade the authorities.