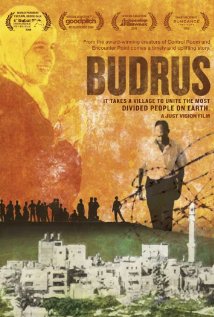 (82 minutes) Budrus is an award-winning feature documentary film about Palestinian community organizer, Ayed Morrar, who unites Palestinian political factions and invites Israeli supporters to join an unarmed movement to save his village of Budrus from destruction by Israel’s Separation Barrier. Success eludes them until his 15-year-old daughter, Iltezam, launches a women’s contingent that quickly moves to the front lines. Struggling side by side, father and daughter unleash an inspiring, yet little-known, movement in the Occupied Palestinian Territories that is still gaining ground today. In an action-filled documentary chronicling this movement from its infancy, Budrus shines a light on people who choose nonviolent strategies to confront a threat. The movie is directed by award-winning filmmaker Julia Bacha (co-writer and editor of Control Room and co-director Encounter Point), and produced by Bacha, Palestinian journalist Rula Salameh, and filmmaker and human rights advocate Ronit Avni (formerly of WITNESS, Director of Encounter Point). Read more information about the crew and cast. While this film is about one Palestinian village, it tells a much bigger story about what is possible in the Middle East. Ayed succeeded in doing what many people believe to be impossible: he united feuding Palestinian political groups, including Fatah and Hamas; he brought women to the heart of the struggle by encouraging his daughter Iltezam's leadership; and welcoming hundreds of Israelis to cross into Palestinian territory for the first time and join this nonviolent effort. Many of the activists who joined the villagers of Budrus are now continuing to support nonviolence efforts in villages from Bil’in to Nabi Saleh to Hebron to Sheikh Jarrah in East Jerusalem. While many documentaries about the Palestinian-Israeli conflict either romanticize the notion of peace, or dwell entirely on the suffering of victims to the conflict, this film focuses on the success of a Palestinian-led unarmed struggle.