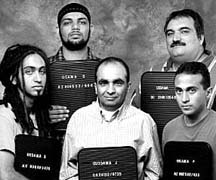 (45 mins) BEING OSAMA provides an intimate look at six men with highly diverse backgrounds, interests and personalities, united by their first names and the experience of living as an Arab in the post 9/11 world. Shot against the cultural backdrop of Montreal, the film follows the six Osamas from the time of the American invasion of Iraq in March of 2003 to the anti-WTO demonstrations in late July of the same year. Through a series of interviews and by observing their daily lives, the film explores how sharing a first name with the world's most notorious terrorist can shape perception and prejudice. Touching upon such subjects as Arab names, rock-n-roll, religion, stereotypes, Middle East politics, marriage, mortality and the meaning of identity, BEING OSAMA is a sensitive and thoughtful portrait of these six unique individuals.