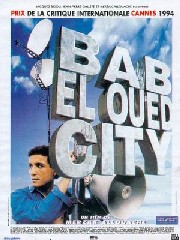 (93 mins) Boualem is a young man who works the local bakery's graveyard shift in the Bab El-Oued district of Algiers. One morning, shortly after the bloody riots of October, 1988, he commits an unthinking act which jeopardizes the entire district: Unable to stand the noise from one of the many rooftop loudspeakers broadcasting the propaganda of a local fundamentalist group, he rips the speaker out and throws it away. The extremists, led by Said, regard this act as deliberately provocative and aim to make an example of the culprit.