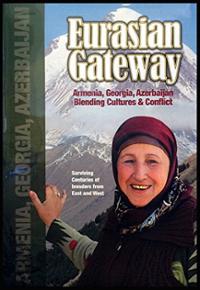 (24 minutes) Often maligned as a cauldron of warring factions and compelling empires, Armenia, Georgia, and Azerbaijan remarkably staved off invaders, yet continue to take advantage of their geography as a Eurasion Gateway. In Armenia, find clues to a culture where science, literary and artistic develoment flourished. Traced through their ancient churches, monasteries and fortresses are gold leaf manuscripts and stunning stone- carved "Khatchkars". Amazingly, after 1700 years the Armenian Apostolic Church still thrives and provides continuity in a country featuring dramatic mountains, gorges and the magnificent Lake Sevan. Equally spectacular are the soaring southern slopes of the Caucasus mountain range defining Georgia's northern border.  From the Black Sea to cave towns to wine country to modern Tbilisi, Georgia celebrates an educational and religious heritage with an irresistible cosmopolitan spirit. Today, all three countries remain pawns in the international economy, especially, strategically-located Azerbaijan on the Caspian Sea, under which are found some of the world's most significant oil and gas fields. In its capital, Baku, you can even smell the petroleum driving a real boom town. Further, exploring this Muslim country discover outlying villages where artisan crafts are displayed along cobbled streets. These three fascinating geopolitical countries all survived centuries of conquests despite a difference in religions and contentious neighbors.  Yet, each remains independent, inviting you into this gateway between East and West