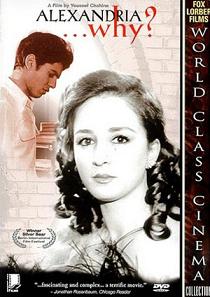 (133 mins; 2 disc/tape set) The first film in Chahine's autobiographical Alexandria trilogy, Alexandria, Why? was a (widely banned) revelation in Arab cinema for its use of first-person narrative and for testing boundaries of cultural identity. In 1942, as Rommel's army nears Alexandria, some cheer the victors, Jews prepare to flee, and a vengeful aristocrat buys British soldiers to seduce and kill them--until he falls in love with one young captive. A young student (Chahine's avatar) adores Shakespeare and Hollywood, dreaming of studying filmmaking in the USA, but as he discovers the lies of European occupation and Americanization, and experiences a sexual awakening, he profoundly reevaluates his identity and allegiances.